I will dedicate an image, “Philos/Doost” from my photographic performance-based series: She Speaks Greek Farsi (2009).

In my series, She Speaks Greek Farsi (2009), my abdomen serves as the site of language. An expression in Greek, to speak any language in a “Farsi way”, is a comment on how fluent and well someone speaks that language. So to speak “Greek Farsi” or “English Farsi” is to speak Greek or English well. By implication and inspiration, if such a compliment exists today (despite the ancient history of war between the Greeks and the Persians), then other similar signs of respect between antagonistic nations might be possible.

From the concrete world of my embodied experience, language is abstracted. At once personal and universal, private and public, I write words on my skin from the flesh of my own tri-cultural heritage. Words whose meanings, however, hold great potency for anyone who has had to relocate and emigrate: family, place, language, love, friend, birth, land, home, person, history, life, memory, body, self, and world.

My own skin is the surface paper on which my art is born. Imagine love written on a womb like the stretch marks from giving birth. Words turn into marks of labor in the creative act. I write in what was my childhood’s handwriting on my skin, performing language. The Greek and Farsi words come from opposite directions, but meet in the middle, creating a calligraphy that travels somewhere between private graffiti and public tattoo. Against the backdrop of the political tensions between Iran and the United States, my work stands as an alternative interaction between differing cultures to the usual domination or demonization. 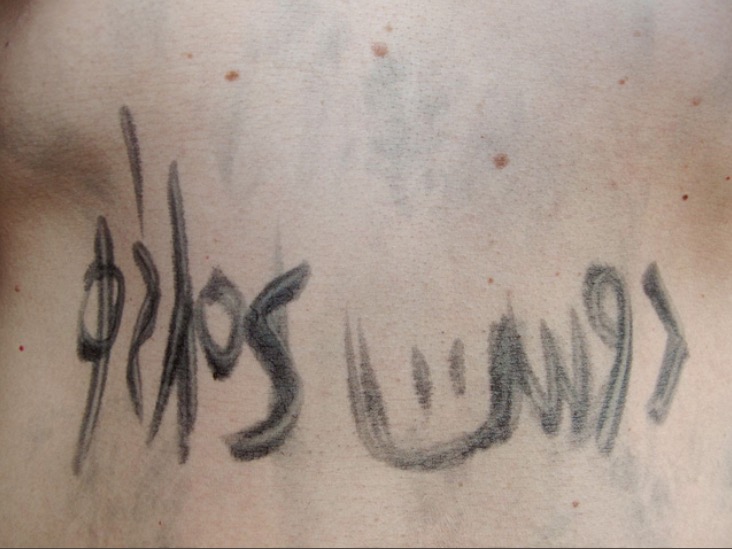