Wine, women and song: A pictorial tribute to Holly Davidson

Holly Davidson is an avowed Irano-phile, a lover of all things Persian, from the national epic, the Shahnama, to Iranian dance, music and cuisine. For me as a historian of Persian art, her interests can be encapsulated pictorially in a small flask from the Safavid period (figs. 1-2), one of a group of at least two dozen examples of such molded wares. All have monochrome glazed decoration. Most like this one are apple green, but a few are glazed in amber or turquoise. Most, again like this one, are rectangular and squat, measuring 8-9 inches high, with closed necks that have often been replaced with metal mounts. Their small size suggests that they served as personal drinking flasks.

The molded sides of these flasks display a wide range of finely executed designs. Some are geometric. Some show sprays of flowers and other foliage. Others have animals, including a camel fighting a zebu, a lion attacking a gazelle, and a writhing dragon or a leaping deer set against a floral landscape. Many have figural representations. One shows a European man holding a cup; another, a woman cradling her baby. But the most popular – at least to judge from surviving examples – is the one illustrated here, of which at least four examples survive in the David Collection in Copenhagen (40.2001), the Doris Duke Foundation for Islamic Art at Shangri La in Honolulu (48.36), the Louvre in Paris (OA 7780) and the Hermitage Museum in St Petersburg (VG 342).

One side (fig. 1) shows a seated woman playing a large tambourine or frame drum with five small metal discs around the rim. She cradles the instrument, known in Persian as a daf or dayera, between her raised knee and cocked head, perhaps listening to the vibrations emitted when she strikes the drum with her right hand. She wears a long and long-sleeved robe tied at the waist by a sash with fluttering ends. A hooded wrap drapes her shoulders and falls down her back, held in place by another sash tied around her forehead. Flowering branches frame the female figure and enhance the sense of introspection. 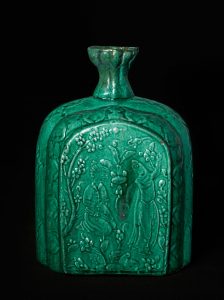 The other side of the flask (fig. 2) displays a more animated scene of a dance set in similar, although more curvaceous foliage. A willowy female swings her arms, perhaps responding to the music created by the similarly enrobed musician on the other side. The dancer glances down at a man seated on his knees. He too wears a long robe, but one that opens at the collar. A large turban with multiple folds dwarfs his head. His outstretched right arm proffers a small flat cup, perhaps a visual allusion to the liquid that the flask would have contained.

The flask can easily be dated to the mid seventeenth century on the basis of similar scenes of merrymaking known from paintings and drawings, particularly those in the style of the famous Isfahani painter Reza Abbasi (c. 1565-1635). These illustrations were used not for only manuscripts and single-page paintings for albums, but also for murals, such as one (fig. 3) on the east wall of the main room in the Chehel Sutun palace in Isfahan, a building begun by Shah ʿAbbas II in 1647. The small vignette, set just below the much larger scene depicting the battle between Shah Ismaʿil and the Uzbeks, depicts three women wearing much the same clothing as those on the bottle (long, long-sleeved robes tied with long scarves, hooded wraps, etc.). The seated female in the center holds a large tambourine, while the one to her left dances to the music, her left foot kicked back and her raised right arm holding the end of her long fluttering scarf. A third woman with an open veil looks on in rapt attention, her finger raised to her lips in amzaement. 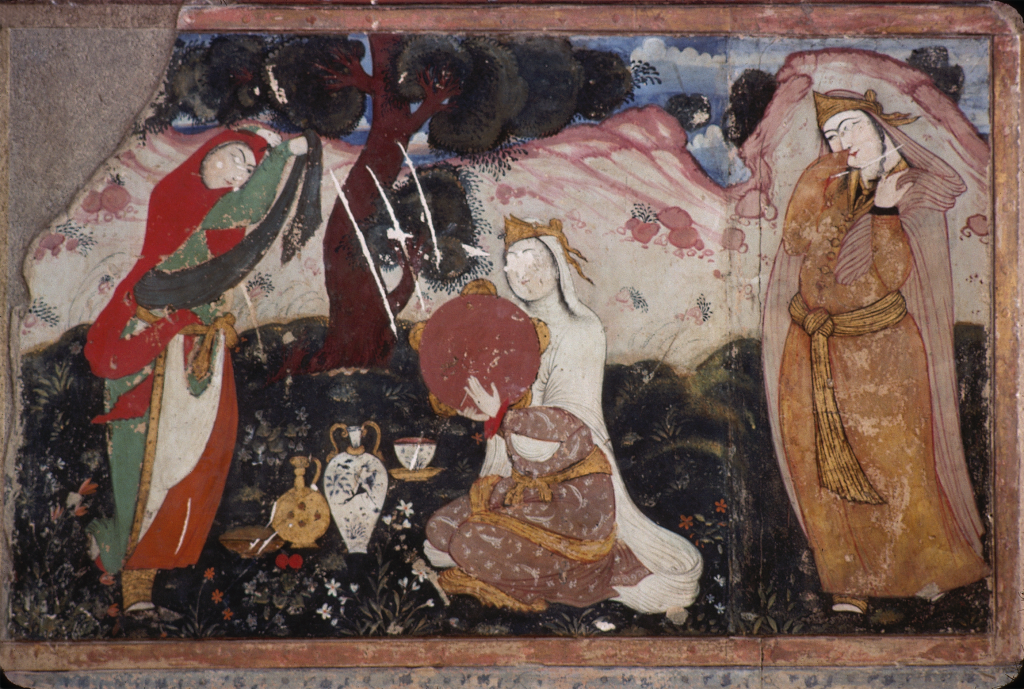 Individual scenes were mixed and matched on the front and back of these mass-produced flasks, so there was clearly no strict iconography of meaning. Rather, the different scenes were meant to appeal to different audiences and convey multiple meanings. The lion attacking a lesser animal, for example, is a traditional Persian motif going back to pre-Islamic times, used, for example, to decorate the stairs to the palace of Darius at Persepolis and interpreted variously as a sign of royal domination or an astronomical symbol of seasonal change as the spring equinox defeats the winter. The woman cradling her baby child immediately evokes the Madonna, known in Safavid Iran through European etchings that circulated at the time. It may have appealed to the local Armenian population in Isfahan. The tambourine was one of the rare instruments considered licit by the strictest religious figures, but when combined with the flute (ney), it evokes Sufi séances.

The most popular seem to be these scenes of females dancing and making music. As some of the rare depictions of women, especially musicians and dancers, they appealed to female collectors of Islamic art like Doris Duke, who favored jazz and gospel music. In addition, the scenes on the beaker illustrate the Persian love of conviviality, the art of entertaining and entertainment that Holly Davidson so much appreciates and enjoys. To Holly, on her birthday, nush-i jan!